The behavior of an animal in its environment to maintain itself depends on the coordination of its organ systems. Without co-ordination of various organ systems, various physiological processes would work in a haphazard way, without linking together activities. The linking together in time and space of various activities of an animal is called co-ordination. Co-ordination is brought about by the nervous system and sense organs, and by means of chemical substances (hormones) secreted by the endocrine glands.

The most fundamental function of a nervous system is (1) to receive a stimulus (2) transmission of a stimulus to a central “brain”, (3) interpretation and analysis of the stimulus and (4) proper response by an effector.

The human nervous system is divided into two interrelated parts:

Brain: The human brain is the central information processing organ of our body, and acts as the ‘command and control system’. It weighs about 1.5kg (average 1350 gms or 3 pounds) and is enclosed in the cranial (skull) cavity. It is covered by 3 membranes, called meninges. The outer membrane, called dura mater (“tough mother”) is a tough, protective covering formed of white fibrous tissue the middle delicate membrane is called arachnoid (web like), and the inner most transparent membrane is called pia mater (“soft mother”), containing blood vessels (nutritive in function). Between the bony and membranous coverings, there is cerebrospinal fluid, which acts as a protective internal cushion. The bony skull, meninges and the cerebrospinal fluid protect the brain from external injury and shocks.

The brain can be divided into three major parts: 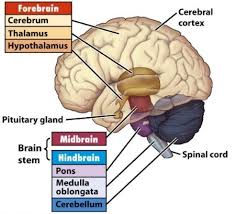 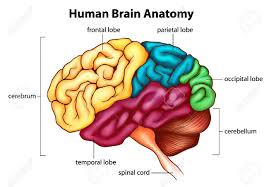 The forebrain consists of cerebrum, thalamus and hypothalamus. Cerebrum forms the major part of the human brain. A deep cleft divides the cerebrum longitudinally into two halves, which are termed as the left and right cerebral hemispheres. The hemispheres are connected by a tract of nerve fibres called corpus callosum. Each hemisphere consists of a frontal lobe, parital lobe, occipital lobe and temporal lobe. The layer of cells which covers the cerebral hemisphere is called cerebral cortex and is referred to as the grey matter due to its greyish appearance. It is involved in the regulation of sexual behaviour, expression of emotional reactions (e.g., excitement, pleasure, rage and fear), and motivation. The cerebrum wraps around a structure called thalamus, which is a major coordinating centre for sensory and motor signaling. Another very important part of the brain called hypothalamus lies at the base of the thalamus. The hypothalamus contains a number of centres which control body temperature, urge for eating and drinking. It also contains several groups of neurosecretory cells, which secrete hormones called hypothalamic hormones.

It is known to connect forebrain to other parts of brain and spinal cord.