Alice, returning to London from China

Alice Kingsleigh (Mia Wasikowska) has spent the past three years following in her father’s footsteps and sailing the high seas. Upon her return to London, from China, she finds out that her ex-fiancé, Hamish Ascot (Leo Bill) holds the deed to her family home! He won’t finance another voyage of discovery and expects Alice to be a clerk at his family firm and sign over her ship to him if she wants her home back.

After a fight with her mother on the matter, Alice follows a caterpillar she recognizes as Absolem and returns through a mirror in her father’s study to the fantastical realm of Underland. Here, she is greeted by her friends, Mirana, the White Queen (Anne Hathaway), White Rabbit (Michael Sheen), Absolem (Alan Rickman), Tweedles (Matt Lucas), the Dormouse (Barbara Windsor), and the Cheshire Cat (Stephen Fry).

They inform her that Tarrant Hightopp, aka Mad Hatter (Johnny Depp) is acting madder than usual because he believes his family is still alive. Alice visits him and tries to console him, but the Mad Hatter remains sure of his families survival of the Attack of the Jabberwocky. He insists that he must find them or die, and enlists the support of Alice to this end.

Time and the Chronosphere

Since finding The Hatter’s family is the only way to reverse his failing health, Mirana decides for Alice to consult Time (Sacha Baron Cohen) himself, and convince him to have her save the Hatter’s family in the past. Upon visiting Time’s palace, The Grand Clock,  Alice finds the Chronosphere, an object that powers all time in Underland and can travel through Time itself.

After being told by Time that altering the past cannot be done, Alice chooses to steal the Chronosphere and travel back in time, but Iracebeth, the Red Queen (Helena Bonham Carter) who is in care of Time, urges him to go after Alice and bring back her head. Alice, meanwhile, attempts to go back to the day of the Jabberwocky attack, but is caught up to by Time who had been sent by Iracebeth, and who wants the device to reshape her own past. 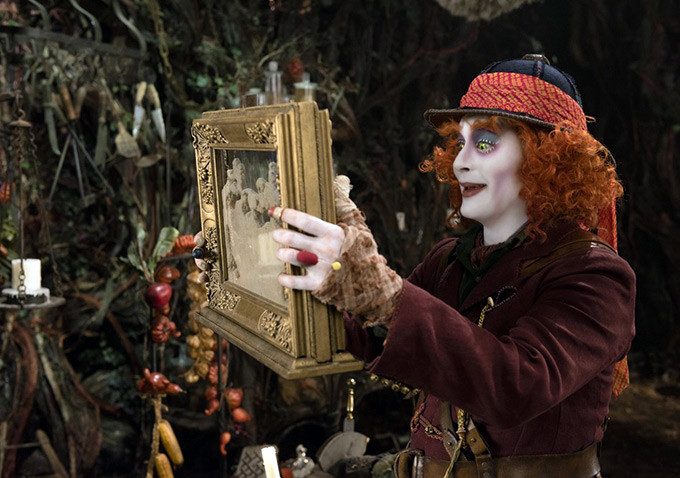 Mad Hatter with his family trapped in the hourglass

During this adventure, Alice learns of an event in Iracebeth and Mirana’s past that caused friction between the two, and she travels back in time hoping to change it. She comes close to preventing the event that started the enmity, but fails.

Hot on her heels is Time who confronts Alice for putting all of time in danger, and for stealing the Chronosphere. To prevent herself from being apprehended, Alice runs into a nearby mirror back into the real world, where she wakes up in a mental hospital, diagnosed with female hysteria. But with the help of her mother, Alice escapes and returns to Underland, where she travels to the Attack of the Jabberwocky and discovers that the Hatter’s family never died, but were only captured by Iracebeth.

The Hatter, Alice and the rest of the Underlanders all go to the Red Queen’s castle on the outskirts of Underland, where they believe The Hatter’s family to be. The Hatter finds his family, is apprehended by Iracebeth, just as Time warns Alice to stop Iracebeth from changing the past and destroying the universe.

Mirana and Iracebeth settle their differences and make amends. Alice bids her friends farewell and returns to the real world where her mother refuses to return Alice’s ship over to Hamish, and the two set to travel the world together.